Each ml contains 100 units of insulin glargine and 50 micrograms lixisenatide. 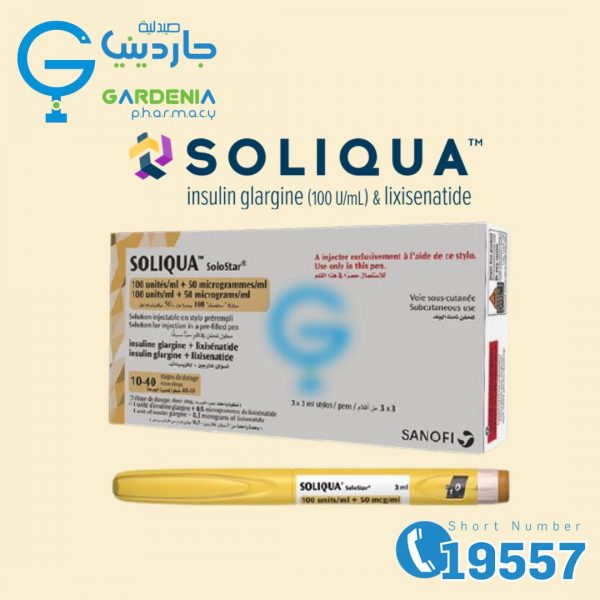 Soliqua or Suliqua  is indicated for the treatment of adults with insufficiently controlled type 2 diabetes mellitus to improve glycemic control as an adjunct to diet and exercise in addition to metformin with or without SGLT-2 inhibitors. 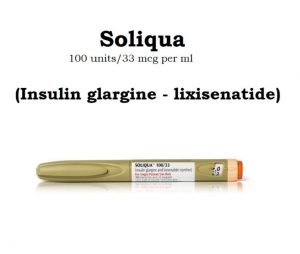 The primary activity of insulin, including insulin glargine, is regulation of glucose metabolism. Insulin and its analogues lower blood glucose by stimulating peripheral glucose uptake, especially by skeletal muscle and fat, and by inhibiting hepatic glucose production. Insulin inhibits lipolysis and proteolysis, and enhances protein synthesis.

Examples of Insulin Glargine in Egypt

Lixisenatide is a GLP-1 receptor agonist. The GLP-1 receptor is the target for native GLP-1, an endogenous incretin hormone that potentiates glucose-dependent insulin secretion from beta cells and suppresses glucagon from alpha cells in the pancreas.

Lixisenatide stimulates insulin secretion when blood glucose is increased but not at normal glucose levels, which limits the risk of hypoglycaemia. In parallel, glucagon secretion is suppressed. In case of hypoglycaemia, the rescue mechanism of glucagon secretion is preserved. A postprandial injection of Lixisenatide also slows gastric emptying thereby reducing the rate at which meal-derived glucose is absorbed and appears in the circulation.

You may experience Hypoglycemia if you take Soliqua with

• Any other medicine to treat diabetes.
• Disopyramide, for some heart problems.
• Fluoxetine, for depression.
• Sulphonamide antibiotics, to treat infections.
• Fibrates, for lowering high levels of blood fats.
• Monoamine oxidase inhibitors (MAOIs), for depression or Parkinson´s disease.
• Angiotensin converting enzyme (ACE) inhibitors, for heart problems or high blood pressure.
• Medicines to relieve pain and lower fever, such as pentoxifylline, propoxyphene and salicylates
(such as acetylsalicylic acid).
• Pentamidine, for some parasite infections. This may cause too low blood sugar which is
sometimes followed by too high blood sugar.

You may experience Hyperglycemia if you take Soliqua with

• Corticosteroids such as cortisone and prednisolone, for inflammation.
• Danazol, for endometriosis.
• Diazoxide, for high blood pressure.
• Protease inhibitors, for HIV.
• Diuretics, for high blood pressure or fluid retention.
• Glucagon, for very low blood sugar.
• Isoniazid, for tuberculosis.
• Somatropin, a growth hormone.
• Thyroid hormones, for thyroid gland problems.
• Oestrogens and progestogens, such as in the contraceptive pill for birth control or use of
oestrogens for bone loss (osteoporosis).
• Clozapine, olanzapine and phenothiazine derivatives, for mental health problems.
• Sympathomimetic medicines such as epinephrine (adrenaline), salbutamol and terbutaline, for
asthma.

Soliqua should not be used during pregnancy. It is not known if Suliqua harms your unborn child.
Suliqua should not be used if breast-feeding. It is not known if Suliqua passes into your milk.
If you are pregnant or breast-feeding, think you may be pregnant or are planning to have a baby, ask
your doctor or pharmacist for advice before taking this medicine.

Side Effects of Soliqua

Dizziness
Feeling sick (Nausea)
Vomiting
Diarrhea
Skin and allergic reactions at the injection site: The signs may include redness, unusually
intense pain when injecting, itching, hives, swelling or inflammation. This can spread around
the injection site. Most minor reactions to insulins usually disappear in a few days to a few
weeks.

How to store Suliqua ?

Before first use
Store in a refrigerator (2°C-8°C).
Do not freeze or place next to the freezer compartment or a freezer pack.
Keep the pen in the outer carton in order to protect from light.

After first use
The pen may be stored for a maximum of 28 days out of the refrigerator, but below 25°C.

Discard the pen after this period.

Do not return the pen to a refrigerator and do not freeze.

Store the pen away from direct heat or direct light.
Do not leave the pen in a car on an exceptionally warm or cold day.
Do not store the pen with the needle attached.

What is the price of Soliqua Prefilled pens in Egypt ?

Suliqua is a clear and colourless solution for injection (injection) filled in a glass cartridge inserted in a SoloStar pre-filled pen. Each pen contains 3 ml of solution. The whole package is for 1416 EGP in December 2021.