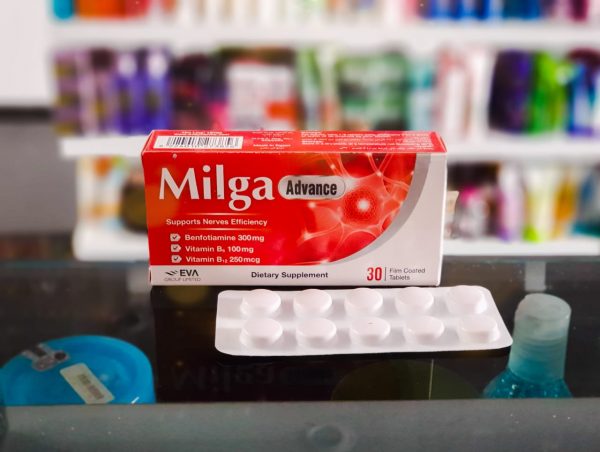 What is the difference between Milga advance and Milga tablet ? 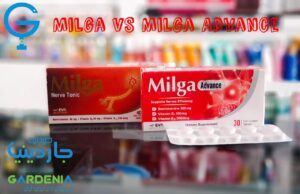 Milga Advance tablets were produced by Eva company, which is considered to be higher in concentrations of vitamin B6 and vitamin B1 and is known as benfotiamine than the regular Milga tablets.

What are the benefits of the active ingredients in Milga Advance?

Benfotiamine is similar to thiamine (vitamin B1), but is better absorbed by the body than thiamine. The body converts benfotiamine into thiamine.
Benfotiamine is used to treat nerve damage caused by diabetes (diabetic neuropathy). It is also used in Alzheimer’s disease, and arthritis.
It is used to treat nerve pain in patients with diabetes (diabetic neuropathy) or neuritis. Taking benfotiamine by mouth, with or without vitamin B6 and B12, can improve pain and other symptoms of nerve damage caused by diabetes.

Vitamin B6 is a type of B vitamin. It can be found in some foods such as grains, beans, vegetables, liver, meat, and eggs. It can also be made in a laboratory.
Vitamin B6 is used to prevent and treat low levels of pyridoxine (pyridoxine deficiency) and the anemia that may result. It is also used for heart disease, Premenstrual Syndrome, depression, and many other conditions.
Vitamin B6 is often used with other B vitamins in vitamin B complex products.
Some epileptic seizures require vitamin B6 intake.
It is used in a rare case in which the body makes abnormal red blood cells and results from the accumulation of iron in the body (sideroblastic anemia).
Vitamin B6 Deficiency. Taking vitamin B6 by mouth is effective in preventing and treating vitamin B6 deficiency.

Premenstrual syndrome (PMS). There is some evidence that taking vitamin B6 as pyridoxine by mouth can improve PMS symptoms, including breast pain. The lowest effective dose should be used. Higher doses will increase the chance of side effects and are not likely to increase beneficial effects.
It is used to reduce menstrual cramps (dysmenorrhea). Early research suggests that taking vitamin B6 daily might reduce menstrual pain.
Vitamin B6 is used to treat symptoms of premenstrual syndrome, including anxiety, depression, and irritability.
Researchers believe that vitamin B6 helps treat emotional symptoms related to PMS due to its role in the formation of neurotransmitters that regulate mood.
A three-month study of more than 60 premenopausal women found that taking 50 mg of vitamin B6 daily improved PMS symptoms of depression and fatigue by 69%.

Vitamin B6 found in Milga Advance and pregnancy

To treat nausea. Some research suggests that taking vitamin B6, usually in the form of pyridoxine, improves symptoms of mild to moderate nausea and vomiting during pregnancy.
Vitamin B6 is a first-line treatment for nausea and vomiting caused by pregnancy. Vitamin B6 plus doxylamine is recommended for women who do not improve when treated with only vitamin B6. However, this combination is less effective than ondansetron

Its use in breastfeeding. Early research suggests that taking vitamin B6 daily for about a week after delivery does not stop breast milk production.

During the process of eliminating homocysteine, which causes erectile dysfunction, vitamin B12 plays an important role in getting rid of it from the body and thus improving the erection later.

It is used to treat nerve pain in patients with diabetes (diabetic neuropathy) or neuritis. Taking benfotiamine by mouth, with or without vitamin B6 and B12, can improve pain and other symptoms of nerve damage caused by diabetes.

Show reviews in all languages (3)