Eraloner is indicated , in addition to standard therapy including beta-blockers, to reduce the risk of cardiovascular mortality or morbidity in stable patients with left ventricular dysfunction (LVEF ≤ 40 % ) and clinical evidence of heart failure after myocardial infarction.

Follow all directions given to you by your pharmacist or doctor carefully . They may differ from the information contained in this leaflet

Ask your pharmacist or doctor for help if you do not understand the instructions on the box .

The recommended dose is : –

For the individual adjustment of dose, the strengths of 25 mg and 50 mg are available. The recommended maintenance dose of Eraloner is 50 mg once daily (OD). Treatment should be initiated at 25 mg once daily and titrated to the target dose of 50 mg once daily preferably within 4 weeks, taking into account the serum potassium level. Eraloner therapy should usually be started within 3-14 days after an acute myocardial infarction. Patients with serum potassium level > 5.0 mmol/L should not be started on Eraloner Serum Potassium should be measured before initiating Eraloner therapy, within the first week and at one month after the start of treatment or dose adjustment. Serum potassium should be assessed as needed periodically thereafter. After initiation, the dose should be adjusted based on the serum potassium level . In case of Serum potassium /= 6.0 mmol/L so Action withhold ; Dose adjustment is N/A . Following withholding Eraloner due to serum potassium >/= 6.0 mmol/L, Eraloner can be re-started at a dose of 25 mg every other day when potassium levels have fallen below 5.0 mmol/L. Children and adolescents: There are no data to recommend the use of Eraloner in the pediatric population, and therefore, use in this age group is not recommended. Elderly: No initial dose adjustment is required in the elderly. Due to an age-related decline in renal failure, the risk of hyperkalemia is increased in elderly patients. The risk may be further increased when co-morbidity associated with increased systemic exposure is also present, in particular mild – to – moderate hepatic impairment. Periodic monitoring of serum potassium is recommended. Renal impairment: No initial dose adjustment is required in patients with mild renal impairment. Periodic monitoring of serum potassium is recommended, Earloner is not dialysable. Hepatic impairment: No initial dosage adjustment is necessary for patients with mild-to-moderate hepatic impairment . Due to an increased systemic exposure to Eraloner in patients with mild-to-moderate hepatic impairment, frequent and regular monitoring of serum potassium is recommended in these patients, especially when elderly. Concomitant Treatment: In case of concomitant treatment with mild to moderate CYP3A4 inhibitors, e.g. amiodarone, diltiazem and verapamil, a starting dose of 25 mg Od may be initiated. Dosing should not exceed 25 mg OD, Eraloner may be administered with or without food.

No cases of human overdosage with Eraloner have been reported. The most likely manifestation of human overdosage would be anticipated to be hypotension or hyperkalaemia. Eraloner cannot be removed by hemodialysis, Eraloner has been shown to bind extensively to charcoal. If symptomatic hypotension should occur, supportive treatment should be initiated. If hyperkalaemia develops, standard treatment should be initiated.

Hypersensitivity to elerenone or any of the excipients. Patients with serum potassium level > 5.0 mmol/L at intiation. Patients with moderate to severe renal insufficiency ( creatinine clearance STORAGE OF ERALONER 25MG 20TAB 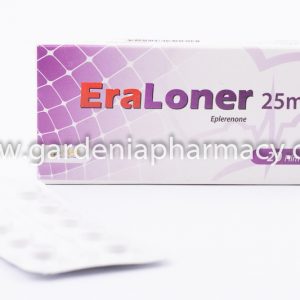