Mechanism of Action of Atrovent

Ipratropium bromide is a quaternary ammonium compound with anticholinergic (parasympatholytic) properties. In nonclinical studies, it appears to inhibit vagally mediated reflexes by antagonizing the action of acetylcholine, the transmitter agent released from the vagus nerve.

Anticholinergics prevent the increase in intracellular concentration of Ca++ which happens due to interaction of acetylcholine with the muscarinic receptor on bronchial smooth muscle. Ca++ release is mediated by the second messenger system consisting of IP3 (inositol triphosphate) and DAG (diacylglycerol).

The bronchodilator effect of ipratropium bromide in the treatment of acute bronchospasm with asthma has been shown in studies in adults and children ≥ 6 years of age. In most of these studies ipratropium bromide was administered in combination with an inhaled beta2-agonist.

Side effects of Atrovent

other difficulties in breathing, do not use any more (unless you have been told to

cases the signs include swelling of your mouth and face, sudden difficulties in

breathing and reduction of your blood pressure. Tightening of your throat.

Other side effects include:

There is evidence that the administration of ipratropium bromide with beta-adrenergic drugs and xanthine preparations may produce an additive bronchodilator effect.

It may increase the risk of acute glaucoma in patients with a history of narrow-angle glaucoma when nebulized ipratropium bromide and beta2-agonists.

The therapeutic effect of ipratropium bromide occurs by producing local action in the airways. Time courses of bronchodilation and systemic pharmacokinetics do not run in parallel.

Following inhalation, 10 to 30% of a dose is generally deposited in the lungs, depending on the formulation, device and inhalation technique. The major part of the dose is swallowed and passes through the gastro-intestinal tract.

The portion of the dose deposited in the lungs reaches the circulation rapidly (within minutes).

Cumulative renal excretion (0-24 hrs.) of the parent compound is about 46% of an intravenously  dose, below 1% of an oral dose and approximately 3 to 13% of a dose by inhalation. Based on these data the total systemic bioavailability of oral and  doses by inhalation of ipratropium bromide is around 2% and 7 to 28% respectively.

Taking this into account, oral dose portions of ipratropium bromide do not contribute significantly to systemic exposure.

The drug is minimally (less than 20%) bound to plasma proteins. Nonclinical data indicate that the quaternary amine ipratropium does not cross the placental or the blood-brain barrier. 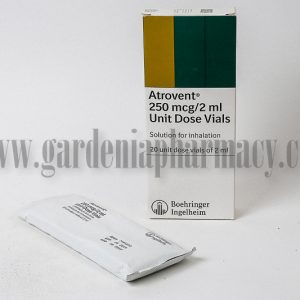